Why would somebody want to be a life model? Is the job simply being paid for being naked? What is the difference between life models and exhibitionists? In a basement with no windows, only a big heavy iron door, I felt a little bit suffocated. The room was crowded with artists who were sitting around a man, a stark naked man. For the first several minutes, I couldn’t help but peep at “that part” of him. However, when I realised that I was in a life drawing class, that even I was a first-time painter, I began to focus on the lines and shape that defined the body, regardless of clothes and gender.

The man who is life modelling is Andrew Lamb, who has become the most employed life model in UK-NAKED MAN, and people call him Andy. It was 1993 when one of his friends first needed a male model but couldn’t find anybody. Asked how he felt on that occasion, he answered, “Frustrated. The first time, you undressed in front of strangers. It’s a bit wired, and scary perhaps, but after the event, I felt empowered. I felt, ‘wow, I’ve done it’. I came out the other side, stronger.” Andy then worked on and off as a life model for a few years, but there was little work with very poor payment. In 2010, he thought it would be a good idea to create an organization encouraging life models to work together and protect the common interests of the group. That’s how Cardiff Life Models, the largest provider of life models was established.

A scratch painted by an artist “Currently, I’ve got 20 life models. There’re 16 females, and 4 males. The average age of females is around 23, males is 65. Young women, and old men, “I don’t know why,” said Andy. “I struggled to find the right kind of male model. I get one enquiry every four nights from females, one enquiry every two months from a male. Often the females are reliable, turn up to an introductory session. On the other hand, males don’t turn up, or they come with someone else. Females usually come along.” Growing a group from a single person to an energetic and innovative family, it’s not as easy as you’d imagine. In Cardiff, life models were paid only £7.80 per hour, and with no provision for travel expenses. And now Andy’s group has raised the price to 15 pounds per hour, which is the lowest pay rate for models in UK. “We’ve worked with every college in South Wales, but no universities, because they won’t pay,” said by Andy. “Currently, every university in South Wales is paying less than the nationally agreed rate. Whereas, every college in South wales is paying more than the nationally agreed wage, and that’s because of Cardiff Life Models working hard to make them pay more.”

Besides fighting to drive up pay and working conditions for life models; training new models, guiding them into the new stage and helping them feel confident to be naked are also Andy’s job. “For a new model’s first session, I will be there, and we will work side by side. I will do the first pose, for two minutes, and we always start with short poses, and longer later. Then the model will do two minutes after me. That helps the model not to be too stressed, because someone else is working in the room also,” explained Andy, “sometimes the modelling task is tough. The longest pose I’ve held was 5 hours, which had breaks, but I had to keep going back to the same pose. For three days running, it was 15 hours in total. That was hard, and that’s why models are being paid.” The most difficult thing for Andy and his group is not overcoming the tough modelling task, or arguing for basic payment, but dealing with public opinion and criticism. Many people question the motivation for life modelling. Is there anybody who really enjoys being a life model? What’s the difference between those people and exhibitionists?

“Many people don’t understand the nature of life modelling, many people don’t understand why somebody would want to be paid naked. Actually many women, come along to become life models improve their body confidence. In life drawing class, the model has control of the session, they are the most important person in the room. They receive respect from the artists, who value the diversity of the human form. Big, small, fat, thin, any shapes,” Andy explained. “Our mental image of another person, is based on the media’s portrait of what bodies should look like. And actually all bodies are very different. The media limits our idea of what human bodies look like, trying to make them into one type. Many females are becoming harsh with their bodies, and males ruin their bodies by going to the gym too much, even using drugs to build their muscles.” Andy has been trying to guide those models, who lack confidence in their bodies, to relax in the life modelling class.

“For some people who may think there is sexual tension in the room, actually no. Going back to the female life model, when the artists are drawing her, they are not actually staring at her, not looking at her as her, but breaking her down into parts, and mapping out their pages, putting those parts together.” Andy said. “What’s hidden is dangerous. Once a college asked if the models could keep their underwear on. And I said ‘no, we won’t do that.’ So if I stand in a room of artists where I wear swimming trunks, or pants, I feel sexualised. Because I know the people who are drawing me will think ‘I wonder what his bum looks like, how big his penis is.’ So we said no. We think that makes it a more dangerous experience, more sexualised environment, which is like how our society sexualises female bodies by using partial nudity in advertisements, as you can see girls wearing bikini in car advertisements.” For Cardiff Life Models, Andy hopes to see the group running by itself. He said he would let the models take over the group, running it properly and collectively. Collecting people together is difficult. “It’s like herding cats,” he said.

As for his own future plans, Andy wants to spend more time on writing. As a talented person, he’s been writing poems for a long time, and his first collection of poetry was published in March of this year. He also organized a monthly meeting group of creative writers, aimed at publishing collections of work by writers from South Wales. “My book of poetry isn’t very pleasant to read, it’s about relationships, with girlfriends, with parents. It’s about love and heartbreak. I have a son who lives in America, and we don’t meet very often. I don’t have girlfriend, forming relationships with someone in Cardiff, who isn’t the part of the art community is hard. They would find it very difficult living with me, because of…… the work I do.” 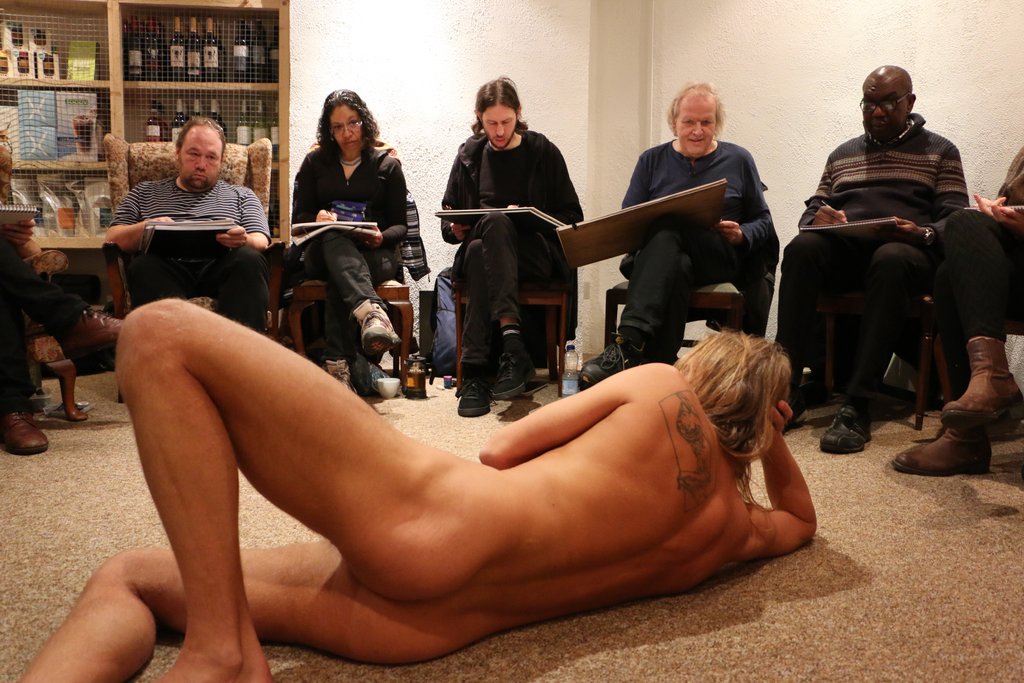